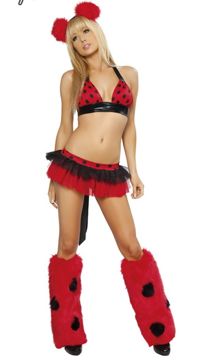 I didn’t dress up for Halloween last night. Why? Frankly, I’m over it.

Now, the idea of men dressing like women I rather like. Let guys get a taste of what we gals go though to look beautiful. My ex once dressed as a woman for Halloween and he bitched and complained all night about his feet hurting. From a two-inch chunky heel, mind you. Shiz, those are my comfy shoes.

I think it began some time in the 90s. I remember going to a Halloween party and seeing a woman sporting nothing but a red bathing suit that read “Baywatch” across the chest. My friends and I laughed at her and figured she must be desperate for attention.

Little did we know it was only the beginning of Hoochie Halloween.

I really don’t hold it against women who do the Halloween ho-down anymore, because these days, it’s almost as though we don’t have a choice. It has now become status quo to don a costume that displays every square inch of flesh save for nipples, buttcrack and landing strip.

Not to mention, there is a lot of pressure to sex it up on this day. I mean, if every other chick at the party looks like this: 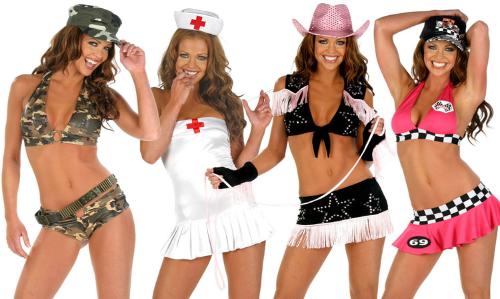 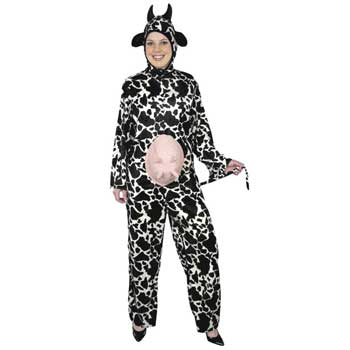 No one wants to be the cow at a hooker parade. You may not be desperate for attention, but you won’t get any attention in this getup. Men simply wouldn’t respond to a costume like this. Yes, your teats are exposed — but there are four of them, and that’s a little scary for men. Even on Halloween.

And if you’re in a relationship, you gotta keep your man’s eyes on you and not on the tsunami of tits coming at him from every other direction. That’s right, the relationship bitches are often the trampiest of all the Halloween floozies.

The whole ordeal has just become a bit ridiculous. So that’s why I pass on Halloween.

Yes, yes, I know. If my self-esteem were higher I wouldn’t give a shit, rock the cow costume if I wanted to and feel good about it. But give me a break. I live in LA. Women wear stilettos to Rite Aid.

I prefer to dress like a big ho on my own terms, not because a holiday tells me I should. Unless, of course, it’s Easter.

But There’s a Bigger Problem

In all honesty, the reason I don’t dress up for Halloween actually has little to do with my nonconformist nature or my gross insecurities.

Do you want to know the real reason I don’t play the Halloween hooch?

It’s almost November, for crying out loud! I know I live in Southern California, but I’m the girl who shivers in her hooded parka when everyone else is sweating. I’d freeze my ass off wearing next-to-nothing at a bone-chilling 62 degrees. I certainly wouldn’t enjoy myself.

For me to go out on Halloween, I’d need to dress up like a grizzly bear to keep warm. Unfortunately, a search for “women’s grizzly bear costume” produced these results:

It just wasn’t meant to be. So I am sitting at home on All Hallows’ Eve, writing this blog post in my very unsexy, very warm, leopard-print Snuggie.