5 Ways Tom Made My Parents Not Hate Him 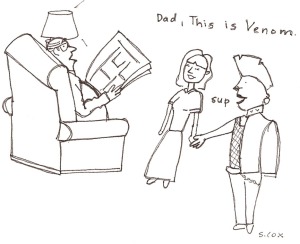 The unthinkable has happened.

I don’t know how, but I have sustained a boyfriend for five months in a row. The “L” word is uttered between us on a daily basis. And now, Tom has met and spent a major holiday with my parents.

And no one got stabbed.

To be honest, I wasn’t terribly worried about it. At worst, I thought maybe my folks might think him gay because he wears earrings (the cool rocker kind) and that Tom might think my mom was a raving loon (she is… God love her). But if these ghastly thoughts were thought, no one said anything.

How’d we pull off a drama-free Thanksgiving? I’m not certain. But I think the following may have had an effect.

5 Ways Tom Made My Parents Not Hate Him

Aside from both men wanting me to address them as “Daddy,” Tom and my old man have one thing in common: they both like to get their drink on. So Tom made an instant bestie when he strolled in the joint with a 30-pack of my dad’s fave, Miller High Life in a can. They drank like frat boys and shot the shit in my father’s office: the garage. With this gesture, Tom was in like Flynn. Whoever that is.

Every time I come home and particularly when we have a guest, my mother insists on making enough food for the entire original cast of The Biggest Loser. My father and I are not big eaters, but she continually pushes the grocery on us.

“Have some more beans!”

“Ohhh. But you didn’t eat much. You need protein!”

“I really don’t want any more.”

“Just a little more. You look so frail!”

It’s the same tête-à-tête every time. But Tom knew exactly the right response.

He had three helpings of everything and my mother finally felt like she accomplished something in life.

This actually may have charmed me more than my parents. When dinner was over, Tom dutifully helped clear the table, rinsed off the dishes and loaded them into the dishwasher. This was in stark contrast to my lazy ass ex, who would just sit there and expect everyone to wait on him. The moment I saw Tom pick up plates, my heart fluttered and I made a mental note to reward him with one of my special HJs as soon as we got home.

4. He refrained from porking me.

Although it was hard (snicker, snicker), my bedroom is just one door down the hall from my parents’. And though I’m simply irresistible, the slightest bit of activity on my bed makes the headboard rattle so loudly it may as well have an alarm attached, screaming, “Alert! Alert! I am banging your daughter!” Since Tom didn’t feel like being caught pants down, penis up by a man filled with 15 cans of Miller, he effectively stayed off my ass.

Also, I was on the rag. Lucky boy.

All joking aside, Tom’s mama raised him right. He said “please” and “thank you,” looked my parents in the eye when speaking, listened intently when spoken to, and bought flowers for my mom. He was even patient and willing when my father tried to teach him sudoku. The boy could teach a class on how to act when meeting parents, because he got an A+.

Of course, the minute we got home he shat, belched and farted with the reckless abandon of Courtney Love just getting out of rehab.

So now I’ve met his parents, he’s met my parents, and somehow, we’re still together. Who knows what’s next? One thing is for sure: I promise not to torture you with ridiculous sequels starring Dustin Hoffman and Babs such as Little Fockers. Fock, no.

And for the record — since many of you have asked — no, I am not changing my name. As I said before, I don’t change my name, and besides, there ain’t no ring on my finger. As long as this blog exists, I shall always be singlegirlie. Until, of course, I change my mind.