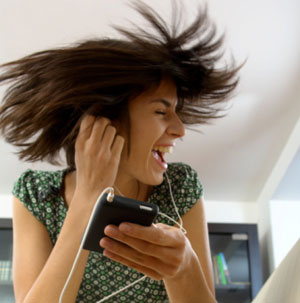 It has been one week and three days since Tom and I broke up. And to be sure, during this time I have many times felt like starting my car and giving my tail pipe a hummer.

When I was 16, my first love dumped me after three months. I was heartbroken and thought it best to rub my own nose in it by playing schmaltzy love songs over and over again on my sweet cassette deck.

I sat in my room listening to some kind of Boyz II Men or Celine Dion rubbish and blubber, drool, lament and moan for a month straight.

Until one day I channeled Cher, who hit me in the boob and yelled, “Snap out of it!”

“What in shit’s name are you doing, girl?” Cher said. “You have a choice. Why do you choose to make yourself sad? Hoooooo!”

This woman is so smart! I was making myself feel miserable on purpose by listening to these heart-wrenching songs. I realized how self-defeating this behavior was and vowed never again.

Now, after a breakup, I don’t look at old photos. I don’t read old texts. And I don’t listen to maudlin songs that are just going to make me depressed and miss him even more. Instead, I now listen to music that makes me feel happy, confident and empowered.

Some people say you need a grieving period in which you wallow in your snot, play songs of heartache and cry your eyes out until you can’t cry anymore. But I’m not a masochist. Screw that noise.

These are the songs I’m grooving to now.

Lily Allen’s “Alright, Still” album is the best to listen to following a breakup. (Except Littlest Things. DO NOT listen to Littlest Things unless you care to slit your wrists.)  “Smile” is biting, bitter and sweet all at the same time. (“Not Big” is also brilliant, but unfortunately does not apply to Anaconda Tom.)

Best lyric: “At first when I see you cry… well, it makes me smile.”

Best lyric: “I’m like a chainsaw… I’ll skin your ass raw… And if my day keeps going this way I just might break your fucking face tonight!”

3. Moving on Up by M People

Sing it, sista. You fucked up, I don’t need you, I’m moving on to something better. Plus, you know how I dig disco.

Best lyric: “I’ve had enough of me, baby, being part of you.”

Because you know they always come back. And when he does, you can just say, “Fuck your fucking face, Uncle Fucka.” (By the way, get a load of pre-skank Mariah.)

Best lyric: “Someday, ooh, someday, the one you gave away will be the only one you’re wishing for.”

I chose this simply because it makes me happy. It’s impossible to be sad while listening to this song. My fave part is at :22 when he says “chug-a-chug.” And how effing RAD is this guy? Denny’s got competition.

And now is the time for you to share. Because sharing is caring. What do you listen to after a breakup to make yourself feel better?