What’s Your Number? Who Gives a Sh*t?

In the new movie, “What’s Your Number,” the main character fears she has slept with too many men – thanks to Cosmo – and tries to get back together with one of her exes so she doesn’t go over a certain number.

And just how many boys has this brazen hussy boned, you ask?

Nineteen. No, not nineteen hundred. Nineteen.

Does anyone else think this is weird? Okay, weird’s not the right word. Try outlandishly fucking ridiculous?

In real life our leading lady, Anna Faris, is 34 years old. Let’s say her character in the movie is the same age – hell, let’s be generous and say she’s 30.

And let’s say she lost her virginity at 17, the average age according to the always-accurate Wikipedia.

Now, I hate math as much as any writer, but let’s do some simple arithmetic, shall we?

So, according to my calculations, that means that in 13 years of copulation, she’s porked an average of 1.46 men a year.

Pardon my French, but THAT’S NOT A FUCKING LOT!!!

But then again, maybe I am.

When I was younger, some people considered me a slut. And yes, I slept with more than 1.46 men a year. Maybe four or five a year. Sometimes more, sometimes less. Is that excessive? I didn’t think so. But I guess some people did.

Let’s talk a little about promiscuity and society’s expectations for women, shall we?

Some therapists and regular people who think they know a lot will tell you that women who “sleep around” are insecure and unconsciously try to win boys’ affection by having sex with them. I mean, their intentions are unconscious; they’re conscious when they have sex. Well, sometimes.

I can consciously say that this simply was not the deal for me. The deal was this:

Sex was the best feeling in the world, so why would anybody not want to have it all the time? I didn’t use sex as a “tool,” and I didn’t feel like I was compromising myself.

Men often refer to women having sex as “giving it up.” But I never felt like I was “giving” anything. I felt that I was getting something – getting happy, getting my rocks off, getting a blissfully euphoric sensation all over mah womanly bo-dy.

You know, that a girl is supposed to withhold sex for as long as possible. That guys don’t like girls who have sex with them “too soon.” Blah, blah, blah. 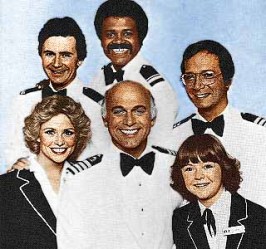 I suppose I got most of my information about sex and relationships through TV and movies. On The Love Boat, two people would meet, make whoopie and get engaged in the span of a one-week pleasure cruise, so what seemed to be the problem? Sex on the first date didn’t seem to be an issue for those couples.

Then, sometime during my college years, I realized that boys often don’t stick around if you make whoopie with them “too soon.” Which was a bummer, because I usually only did it with guys I liked. Okay, maybe I only knew them for a short time, but what I did know, I liked. And I thought they liked me. Why else would they sleep with me?

Unfortunately, no one ever told me that boys sometimes use girls for sex then dump them, either. It didn’t happen like that on The Love Boat, so I learned this lesson the hard way.

Now that I was beginning to realize what society really thought of girls who liked sex, and had sex, I started to feel bad about myself. And it wasn’t because of some innate feminine instinct that tells you to be chaste, but because of external judgment by peers who were taught early on by the church or their parents or other authoritative figure that girls who go all the way are whores.

Before all this, I didn’t know. As they say, ignorance is bliss.

I recognize the value in certain societal conventions. Say “bless you” when someone sneezes, hold the elevator door for others, don’t call your boss a shithead to her face. But this one – this one about the slut-shaming – I just don’t understand. Who does it benefit?

Sex feels fucking fantastic, and it’s not because I’m some kind of nymphomaniac. It’s supposed to feel good and we’re supposed to want to do it – Mother Nature designed it that way so we’d keep the human race going.

It was we humans who decided that 19 dudes are too many for a girl. So can’t we humans un-decide it?

I am by no means advocating for girls to go hog wild upon reading this and mount a truckload of penises. It’s all about individual choice and if you don’t want to, bloody hell, don’t do it.

I’m just saying don’t judge those who do.