6 Reasons Why Having a Boy Toy Rocks My World

I realize it has been some time since I wrote anything about my life. I mean, sure, I’ve shared my opinion on a few matters, gave away some condoms and engaged in general bitching, but I haven’t said much about my dating or sex life in a spell. Today, that changes.

I have an important announcement to make. I have recently joined the ranks of superdivas Cher, Madonna, Jennifer Lopez and Mariah Carey — and I’m not even an über fierce, over-the-top gay icon. But I might be now. Because I, my friends, have a boy toy. A hot one.

Mind you, by no means did I go out prowling the local Dave & Buster’s all couged out and draping my leg over the Full Throttle Zombie Mania 4D machine. The boy came to me — on OkCupid of all places.

“You’re very beautiful. Maybe we should make some margaritas together,” his message said.

Now, normally when I receive a message from a 23-year-old twink I just ignore it. I’m looking for someone I might actually have a future with, plus I really don’t know much about Snapchat or filling out grad school applications or Maria Menounos’s boobs.

But this guy was a FOX, y’all, and I mean for real. After reading his message online I actually looked over my shoulder to make sure he wasn’t talking to someone behind me.

He said he is attracted to older women because he finds them more confident, experienced and well-dressed, plus some women just look better with age. Like I was going to argue?

At first, I felt a bit awkward about the whole thing. I mean, 23? This kid was still shitting green. I wasn’t terribly familiar with the rules of being a cougar, but I did know I didn’t have the funds to have my butt fat injected into my lips or buy a whole new leopard print wardrobe.

I shared Boy Toy’s photo with my gay bf and asked for his take on the matter:

“Well, sometimes the Universe works in mysterious ways,” was his reply.

“What the hell does that mean?” I said.

“It means send a boob pic and ask what time!” he said.

I swear to Mariah, he is like a modern day Confucius.

So now Boy Toy and I have been a thing for a few months now, we never leave the house, and frankly, it’s the most satisfying relationship I’ve had in a long time.

In fact, there are so many upsides to having a boy toy I don’t know why I didn’t do it sooner. I’ll give you six reasons why mine rocks:

1. He aims to please, and does

The first time I got supine with his behind, he looked me straight in the eye and said, “I just want to please you.” Um, is further commentary even necessary? And let me tell you, I don’t know or care who he perfected his craft with, but even at the tender age of way-too-young-for-me, sonny boy knows exactly what to do to make my neighbors bang on the wall and tell me to shut the fuck up.

2. He’s got the stamina of Lance Armstrong on ‘roids

Of course, the sexual satisfaction doesn’t stop at his skill set. Long gone are the days of three pumps and a Kleenex grab — this tyke’s got all-natural Cialis running through his veins. Truth be told, it was a little much at first. I was like, hey, granny needs to get some shut-eye so can we please wrap it up, junior? But who am I to look a gift horse in the mouth? So now I just say fuck it, enjoy the ride, and go to work the next day looking tore up like Kesha after a weekend bender.

3. He helped me set up my new smart TV

As if the good looks and sexual prowess weren’t enough, the whiz kid got my fancy new TV up and running, and you are darn tootin’ that shit got me damp. I don’t know what kind of technological sorcery these tots are privy to, but he secured all the wires and plugs and doodads in their rightful homes and we were watching Orange is the New Black within 10 minutes. He even showed me how to use the clicker and programmed the remote on my iPad. Believe you me, without his aid I would still be sitting on the couch staring quizzically at a 50-inch screen filled with this:

4. He makes math and science interesting

Boy Toy is somewhat of a math and science nerd. I, for one, know as much about math and science as I do about what Dick Cheney had for breakfast today. (Although my guess would be flame-broiled baby seals?) However, he has piqued my interest and we have meaningful conversations about drones and sub-atomic particles and wormholes, and I now know that these have nothing to do with bugs.

In essence, I actually learn cool stuff from this barely legal buck. And learning is phat. Okay, maybe I need to brush up on my young people vernacular.

5. He hung out with me on Valentine’s Day and didn’t make it weird

Being with a new-ish guy around this time of year can be as awkward as a wet queef. He’s certainly not my boyfriend, but he’s a bit more than a fuck buddy. I actually enjoy spending time with him – even when my legs aren’t behind my ears.

So on February 13, just as I was pondering how to say “I’d like to hang out with you on Valentine’s Day but that doesn’t mean I want a relationship or anything,” he beat me to it and suggested take out and a House of Cards binge-a-thon with nary a mention of the dreadful holiday. Best Valentine’s ever. 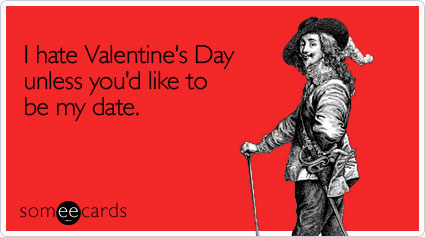 6. He likes to do it to cool music

Have you ever heard of Tame Impala, Purity Ring or Phantogram? I hadn’t either until boy toy pulled them up on Spotify. These are some super sexy beats to get busy to, and now I’ve got a bunch of new songs added to my “Doin’ It” playlist.

Now, I am fully aware that this is going nowhere and honestly, I don’t expect it to. In fact, I think the reason this relationship is so successful is because of the complete lack of expectations. We hang out when we feel like it, text each other now and then, and it’s extremely comfortable.

He’s moving away in the fall and I’m still dating, searching for the ever-elusive “one.” But until then, I am having the fucking time of my life, superdiva-style. In fact, I’ll leave you with a quote from my all-time favorite superdiva, the incomparable Queen Cher:

“A girl can wait for the right man to come along but in the meantime that doesn’t mean she can’t have a wonderful time with all the wrong ones.”