Hey guys! Guess what? I finally signed up for that super hot social media site that everyone is talking about! You know, the really popular one with all the pictures and feeds where you can connect with other people and update your things and stuff?

What’s that one called again?

Okay, I realize I am late to the party on this one. Like, embarrassingly late. So late that the police have totally crashed the party and now everyone’s trickling out and heading downtown to some warehouse to listen to electronic music and do whip-its.

I mean, even my father joined Facebook three years ago. That’s right, my dad was on Facebook before my blog was. Pathetic, I know.

You see, I’ve always been a Twitter girl. I was on Twitter before I even started the blog.

But Facebook? I just didn’t think I had the time to handle two social media accounts, and I was fairly certain I’d screw shit up and mix up my blog account with my personal account and then a) I’d get fired from my conservative job, b) my exes would call and ask if that one guy I blogged about was them, and c) my 70-year-old aunt would have a heart attack reading a gratuitously graphic comment I’d made about dicks.

But everyone told me I had to be there and that I was really missing out on an opportunity and yakity yak, don’t talk back. And because at some point I always give into peer pressure, I finally set up the page.

And you know what?

It’s the goddamned Sahara desert, motherfuckers! Nobody likes me! Why aren’t all my fake Twitter friends flocking over there to like me? Assholes.

And what do you get in return, you ask? Well, rather than dwell on what you’ll get, I like to focus on the negative and tell you what you won’t get. We all know your Facebook “friends” post the most annoying shit that make you secretly wish they’d been a passenger on that Malaysia Airlines flight.

So, if you grant me the privilege of your like, I do solemnly swear not to commit these six cardinal sins that irritate the fuck out of everyone:

1. I shall not post photos of children or babies

Isn’t this just the worst thing ever? I’m at a point in my life when most of my friends have squeezed out a couple already, and this means every other post in my news feed is a squishy pink (or sometimes yellow or brown) blob of flesh participating in some mundane activity, or sometimes just sitting on its ass looking wondrously at a spoon.

Listen, peeps, I know your child is the cleverest, cutest, most fascinating person in the world to you, as it should be. But here’s a truth bomb: your kid is not the slightest bit interesting to anyone other than yourself, and most certainly not to the point at which we need to know every time it craps a different color.

Other parents will like and comment and tolerate this nonsense simply because they do the exact same shit and they want you to return the favor.

But for us singletons? You are just making us hate your kid, and it’s not the kid’s fault. Please, for the love of God, just stop with the spawn photos and post a pic of your butt or something, if for no other reason than to assure us that you’re still the fun-loving, independent-thinking friend we used to know.

Okay, this one will be a tad more difficult for me because whereas I have not as of yet borne a child, I am the legal guardian of a 10-month-old kitten who is the most adorable thing in the world!

And let us just put out there what everyone already knows: kittens and puppies are one thousand times cuter than human babies. All that wispy fine fuzzy fur? And OMG those tiny paws? That is one big fat pile of D’AWWWWW!

However, I do respect and understand that — much like children and your own dreams — this falls under the category of Not Interesting To Anyone But Yourself.

And as such, I shall refrain from posting cat photos and videos.

Unless, of course, he does something so unbelievably astounding it will make me Internet rich. Then fuck you all.

3. I shall not post a selfie whenever the wind blows

We all have this friend. She posts more selfies than she eats calories in a day, and either way, it’s too damn many. I mean really, girl, there’s no need. I totally remember what you look like from two hours ago.

I understand we all have a narcissistic side and there is always that one time your hair actually does what it’s supposed to and a) you have to capture this moment in history otherwise no one will believe you, and b) like a total solar eclipse it will be another year and a half before it occurs again. You post a selfie every year and a half, we’ll let it slide.

There’s no magic number that shan’t be exceeded when it comes to digital self-portraits, but as a general rule: less is more. And if you’re posting them daily (or even weekly), it is clear you are shamelessly seeking social validation and need constant reminders about how hot you are. Come on, people, show some dignity. You should be ashamed of your selfie.

…and then ask anyone who disagrees with me to please just unfriend me. Why do folks with a keyboard and a limited audience inexplicably turn into a horde of little muckraking Bill O’Reillys? It’s usually that quiet guy in finance who can’t make eye contact with you in the elevator but has no problem skewering your ass online with a thousand-word diatribe if you oppose his stance on gerrymandering.

Do not get sucked into this virtual shit-slinging showdown because it inevitably will turn into a “who’s got the bigger dick” contest and you will be stuck in a never-ending feud with someone you really didn’t give a crap about in the first place. 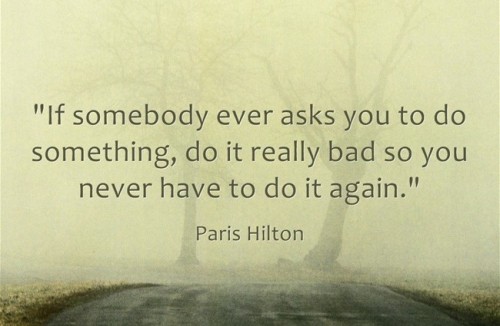 The first time I read one of these on Facebook I thought, oh, isn’t this lovely? Yes, yes, the healthiest response to life IS joy – thank you, thank you, Deepak Chopra!

But somewhere around the 127th time I saw that cursive font superimposed against a raindrop-on-fir-leaf backdrop, I began to develop an immunity to them. Before long they became as hackneyed as the baby pics and the selfies. And by the way, did you ever notice it is always the same people posting these? I am acquainted with a couple people who bombard my news feed daily with this twaddle, and I happen to know firsthand that their lives are fucked.

I mean, listen, Stuart Smalley. If these little maxims help erase the memory of your alcoholic father taking a piss on home plate at your little league game, then good for you. But you aren’t fooling anyone with your fake enlightenment crap, so please just post it on the ceiling above your bed rather than on my wall.

6. I shall not post the results of every BuzzFeed quiz I take

I’m not going to lie, BuzzFeed quizzes are fun. We all need to be more self-aware, and how else would I know that I am an “extremely” awkward Mulan (or Breakfast Club, or pizza) who would be best off pursuing a career as an astronaut and should actually be living in Portland with a hamster?

But here’s the thing. We all know you’ve posted your results only after you’ve taken the damn quiz 13 times in order to get the outcome you wanted. I mean, obviously everyone wants to be Beyoncé.

I took the “Which Seinfeld Character Are You?” quiz, and do you know who I got the first time? Newman. Newman! THIS NEWMAN. 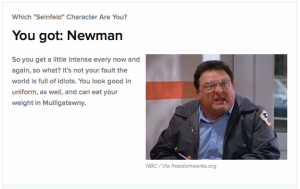 The second time I took it I got Uncle Leo. Whatever.

Anyway, the jig is up, guys. So just save yourself the trouble of announcing to the world that Jennifer Lawrence should play you in the movie version of your life. Because we know you got Kristen Stewart the first time.

So now that you have my word I will not be an insufferable asshole on Facebook, couldja give me a like? Because it’s not like we’re dating or anything.

What do you find to be the most annoying posts on Facebook? Are you guilty of any of these? Fess up.

Categories: In My Most Excellent Opinion, Totally Random