Adventures in Thailand: The Happy Ending

I recently traveled to beautiful Thailand – land of cheap hookers, trannies and pad thai. Thailand is also famed for its cheap massages – something I took full advantage of during my stay.

The Thais consider massage to be medicinal, and I completely agree. Massage is one of my favorite things in the world, and I had planned on getting one every day.

When I arrived on the resort island of Phuket, I was quick to notice the prevalence of massage shops – there were literally three to five on every block. Most of these had female therapists sitting in the storefront, calling out to passers-by, “You wan’ massah?”

While at first I was concerned that these massage places might just be whorehouses in disguise, other travelers and my trusty Rough Guide assured me that many are actually legitimate massage businesses.

I had already received a couple Thai massages and encountered nary a semen puddle, so I felt very comfortable walking into Terrific Massage this Wednesday night.

May gay bf and I had just eaten dinner, and he wanted a foot massage. Of course, he didn’t want an icky girl rubbing his feet, so he went to a by-men-for-men massage parlor we’d discovered the night before on the gay block of town.

I picked Terrific Massage simply for the proximity to his massage place, and we’d agreed to meet up in an hour at the gay bar across the street.

My therapist was Meeyu, who was very smiley and sweet and called me “madame.” All Thais called western women “madame,” which peeved me initially, but then I started to like it. It made me feel like a grand opera diva.

I walked into the joint and there were four stalls, each containing a mat and separated by tropical green curtains that matched the therapists’ sarongs. It wasn’t Burke Williams, but at $10 an hour (the typical rate) I was fine with this, and it looked clean and well kempt.

Meeyu started on my feet and I was beginning to ease into a state of bliss. Until I heard this guy. 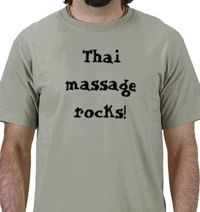 This guy had an Australian accent and was getting a massage in one of the other stalls. He was talkative and spoke in a loud, booming voice, which was irritating. This is a medicinal massage sanctuary, asswipe. People are trying to relax here.

He was flirting with his therapist, and although I couldn’t really hear her, I heard him loud and clear.

I cleared my throat, trying to clue him into the fact that someone else was there, but he didn’t get it. He kept on with his boisterous flirting. Then it got weird.

“So, do you have a boyfriend? Me? O-hohohohohahaho! Maybe you could take off your top?”

I was beyond uncomfortable. I couldn’t relax. I felt gypped out of my $10 massage. I came in for some tranquility and instead I get an auditory sex show starring an obnoxious Australian dude.

I was about to get up and leave – screw the 10 bucks. But then I considered Meeyu, whose elbow was in my erector spinae. I suddenly felt bad for her. Would she feel humiliated if I walked out? I felt like a snobbish, privileged American passing judgment on her. I found myself not moving.

I decided to make a lot of noise myself. “WHAT? YOU WANT ME TO TURN OVER? OKAY, I’LL TURN OVER NOW! THERE WE GO!”

From then on, the Aussie kept his voice down and I only heard whispers and giggling. It is very odd to hear a grown man giggle.

While I could no longer hear him, I knew what was happening behind that curtain. Meeyu asked if I was okay, and I lied, “Yes.” But I was tenser than before I walked in.

Finally I heard some slapping, then some slurping, and then a muffled grunt.

Fine. Now get the fuck out, and thanks for ruining my massage, you perv.

When my massage ended, Meeyu handed me a plastic cup of water with a straw and thanked me with her hands in prayer position. I went out to pay and collect my shoes, and standing before me was the Aussie.

I’d guess him to be in his late 30s, with a receding hairline and Bermuda shorts. He wore a yellow T-shirt with a silhouette of a man sitting on a toilet that read “iPood.”

“I hope you enjoyed yourself,” I said, shooting him the stink eye.

“Oh, I’m going to grab a couple ladyboys and call it a night,” I said. It was the cleverest thing I could think of at the time.

And then I ran across the street into the darkness to meet my gay bf on the gay block, where another adventure awaited.