Why Do People Cheat?

A few weeks ago, a reader asked what my thoughts are on the age-old question: “Why do people cheat?”

Now, before I continue, I want to declare that I am no expert. In fact, I claim expertise in nothing except stealth farting on dates.

Nevertheless, someone actually wants to hear my opinion on something, so by gum, I will indulge the lad.

I pondered this question for a while and had a difficult time gathering my thoughts. Because the truth is, I think there are a kachillion reasons why people cheat. Everyone’s situation is unique.

Then last week I saw a movie called Pretty Ugly People in which one of the characters said that people cheat for one of two reasons. They’re either…

I thought that summed it up pretty well. Although it is certainly more complicated than that, most likely all kachillion reasons could be placed in one of those two categories.

I know from experience that even if you’re in a committed relationship, it is possible to feel lonely. And it’s a shitty feeling, too.

Years ago, when I cheated on my partner with the teenie weenied busboy, it was largely due to loneliness. I was in a failed relationship and my boyfriend and I had grown apart. He wasn’t giving me any attention and I yearned for a connection. Someone else dangled it in front of me, and eventually, I caved.

I by no means absolve myself of any wrongdoing in this situation. Feeling lonely does not excuse my behavior, and I sincerely regret it. I should’ve ended the relationship long ago. But I was scared, and I let it drag on. And then I cheated. I was an asshole.

Some people cheat because they are selfish. In fact, I’d say that in most cases, people who cheat are acting selfishly – even if they are lonely. They usually have a lot of excuses, for example:

“I unintentionally became attracted to someone. I was weak and gave into temptation.”

I understand this is difficult. You can’t control whom you’re attracted to and people make mistakes. This is in part what happened to me, too.

But if you’re committed to another person, in most cases, you’ve agreed that you won’t fuck anyone else in exchange for them not fucking anyone else. So you have to exercise some self-control.

“I’m insecure and need to prove I’m still attractive to the opposite sex.”

Of course, this is not something most people will admit, even to themselves. But it’s not uncommon.

The teenie weenie guy was cheating on his partner. I happen to know I wasn’t the first – or last – person he cheated with. He regularly sought out new paramours. And he had no intention of leaving his girlfriend.

I am certain he was insecure (and with a shrinky dink like his, I’m not surprised). He wanted to prove he was a stud and would brag about his conquests to his friends.

Find other ways to build your self esteem. Don’t make your partner pay for your insecurities. It’s just selfish.

“Humans are not meant to be monogamous. Most animals aren’t. Plus, why would we have the urge to be with other people?”

I don’t think we can ever really know whether or not this is true. But I will say I’m also fairly sure humans weren’t meant to sit in front of computers all day and pig out on processed cheese. We humans do a lot of things we were likely not meant to do.

However, if you are a believer of this theory, that is fine and dandy. Stay single and screw a lot of people. Or find someone who’s cool with an “open relationship.” But don’t get into a relationship and cheat. If you do, it’s just selfish. And I hope you get crabs.

In the past, I thought if you were in a relationship, cheating was the worst thing you could do. And make no mistake, it is bad. I’ve been cheated on, too, and it blows. 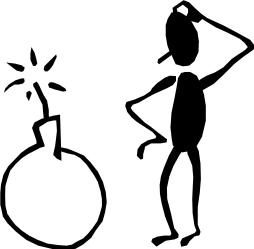 But now I’ve come to realize that people are human. It’s not always easy to do the right thing all of the time. In fact, sometimes, it’s really friggin’ hard.

This is by no means a “Get Out of Jail Free” card, because if you cheat, I’m afraid you deserve any repercussions that may ensue.

We have to take responsibility for our own actions. If your needs are not being met and you have repeatedly expressed this to your partner to no avail, you should seek therapy or end the relationship. Don’t cheat. Cheating sucks.

Thank you to the reader who requested my humble, non-expert opinion. I very well could be full of hooey. I hope I shed some light, from my perspective, on a terribly complex issue.

Why do you think people cheat? What did I miss? Am I full of hooey?