I Married the D-Bag! (My Husband Totally Didn’t Call Me Back… at First) 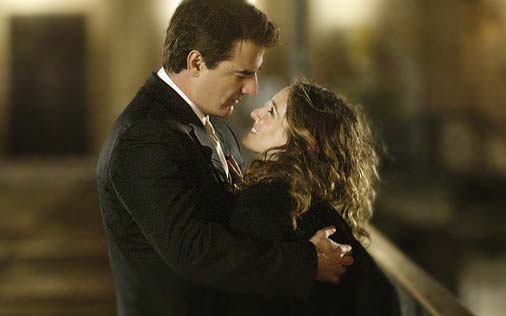 Greetings, SGB fans! Today I’m happy because we have a guest post from one of my favorite people on the internets — the lovely and awesome Liz Marie, social media manager and writer at WeLoveDates! (I’ll be writing for them soon as well, so keep your eyes peeled for me there.)

Today Miz Liz has a fairy tale for us! Well, it sounds like one, anyway. Her story is one the Charlottes among us optimistically dream about while the Mirandas of the world roll their eyes and ask what we’ve been smoking. BUT IT HAPPENED TO HER, GUYS: She married the douchebag and he actually turned out to be a nice guy. Find out how it all went down – and pay attention because there’s an important message in there. And now, over to Liz:

I have to preface this whole post by saying one thing, guys.

My husband is NOT a d-bag. He’s the best. Since the moment five years ago when we decided we were going to stop playing games and be together, he’s been the most attentive, loving, trustworthy, dedicated man in the world and I’m seriously so lucky.

Everything up until that point though?

When we first started dating, he pulled every move in the book. Our first date was amazing–like out of a movie, and even though I wore a romper and had tragic hair extensions, he seemed to be really interested in me, and I was one heck of a smitten kitten. The margaritas flowed, we laughed and laughed, made plans for our next date and I went home feeling like I had met the guy I was going to marry. Aw, sweet, right?

He didn’t call like he said he would. It would take him a few days to return a text, and when he did he always had a shiny new excuse as to why he was busy and we couldn’t hang out. Work. Sick. Traveling. Family problems. I was to the point that even when we did have a date on the calendar for that night, I’d delay getting ready because I knew the inevitable “Hey, I’m SO sorry blah blah blah” text was coming and who wants to blow-dry their hair if they don’t have to?

Just when I hadn’t heard from him for weeks and was about to delete his number, he’d ask me out for a coffee, and obviously I’d accept. We’d sit outside, always in the same spot, and just talk, about everything and anything and make more plans for the future. This went on for weeks. In the parking lot, about to go our separate ways, I’d try to stifle the urge to ask him when we would hang out again at some place other than the Coffee Bean, in fear of looking needy or clingy, but I would anyway, and then we’d get in our cars and drive away, only to have the cycle repeat itself again in a few weeks. I was always left feeling like I’d met the man of my dreams, but that maybe I’d have to accept that I wasn’t the woman of his.

The number one post on WeLoveDates is an article I wrote during this time, when I was dating in Los Angeles like it was my job, but just couldn’t stop thinking about that one jerk who only seemed to want to spend time with me when it was convenient for him. In hindsight, reading this post makes me want to curl up in a corner and hide, because I’m so obviously trying to convince myself — and my readers — that it’s totally fine if a guy you’re dating stops calling you or responding to your texts.

It’s not fine, though.

I often get asked how I went from being the single woman alone in her room (well, not totally alone if you count the bottle of Barbera cuddled in next to me), waiting for a guy to call her back to being happily married to said guy. While it sounds silly to type out, a lot of the e-mails I get are along the lines of “How did you get him to call you back? What did you do?”

Oh, honey child. The only thing I did was force myself to stop caring if one guy in an entire universe full of hot men decided to call me back. Was he an incredibly awesome, hot man? Hell yeah… but so what? We obviously weren’t on the same journey at the time, and I was getting tired of sitting around and wondering what could be if only he’d change how he felt or behaved. I had no control over him; he could sit in his garage all night ignoring his phone, playing with his dog and watching Friends DVDs (this is what I would later learn he was so “busy” with when he was MIA — much less exciting than the orgies I pictured him having in my mind). But for me? I was going to LIVE.

And now we’ve reached the cliche part of the program, folks. But seriously…

I let him do him; I left him alone. I dated a ton of other guys during this period, some good, some horrific, and learned a lot about myself and what I really want out of a relationship. I spent many nights alone eating Yogurtland and blogging. I went to the gym, went to festivals and traveled. Was he always in my mind and heart? Yes, but instead of thinking of him as some d-bag player who didn’t want me, I sent him good vibes. I knew that deep down, there was something inherently good in those deep brown eyes of his, and I respected him enough to give him the benefit of the doubt, even from afar. I let him navigate his own journey alone, and I continued on my own. We stayed friendly on Facebook and Twitter, and we’d still meet up for coffee occasionally, and you better believe I strutted my stuff in that Coffee Bean and Tea Leaf like a new woman, full of confidence and security and without insecurity or hair extensions. Never again did I desperately try to delay our good-bye in the parking lot by asking him when we could hang out next. Instead, I’d hug him tightly and jump in my car. Bye, Felicia.

I’ll never forget the moment I knew it all changed. I was at Forever 21 with my mom, looking for a cheap new outfit to wear on a date with a guy I’d just met. As I was digging through racks of skanky polyester, I received a totally random text message from HIM. “Hey, so how old is your dog again?” I smiled real big (seriously I did, such a creep), texted him back, and we’ve been “talking” ever since. Some of my best friends were hesitant and protective when I told them that we were dating, and rightfully so, but since that day, he’s never once made me feeI like I wasn’t his number one priority.

You can’t make a guy call you. Like you. Love you. Marry you.

All you can do is focus on yourself way more than you focus on him and stop stressing about it. Do you, let him do him and maybe one day your paths will cross. But if not? At least you weren’t the girl begging some guy to call her back in a strip mall parking lot in Orange County.

That move is alllll me, baby.