Because I’m not. Never have been. A lot of guys in Los Angeles complain that LA women are only interested in dating men with money. Clearly, they haven’t met me.

As a matter of fact, never in my life have I dated a wealthy man. The reason lies in this text conversation between my gay bf and me:

To quote every teenage girl in America: “I can’t even.” Despite my gay bf’s constant urging that I acquire a sugar daddy (mostly for selfish reasons; he wants to sunbathe on a yacht), I could simply never put out for a nasty old geezer like Sterling.

And let’s just take off the white gloves and be honest, mmkay? A sugar daddy is never attractive. That’s like a rule. He’s always some gross old guy with corn nut teeth who could use his own balls as a hacky sack – IF he could actually get out of his wheelchair to play hacky sack.

This is not to say there are no handsome rich men on the planet, it’s just that they are rare. I mean, let’s consider the wealthy here – we’re talking about the top 1% of the population. And if you guesstimate that of that 1%, maybe 8% could actually be considered good looking… well, that amounts to NOTALOT of doable rich dudes. And celebrities don’t count because they are not real.

I honestly don’t understand how some of these women do it. Do they suffer from a severe form of macular degeneration? Do they have greater access to hallucinogens than I do? Because the way I see it, no amount of Xanax nor MDMA nor eye of newt nor combination thereof would afford me the desire or the gumption to get it on with Mr. Burns. 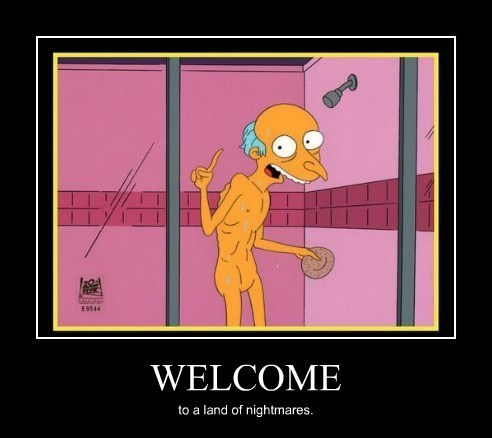 Maybe – and I mean maybe – in the olden days before the advent of erectile dysfunction medication could I tolerate such grisliness. Back then I’d just have to spoon feed the old fart some soup and I’d be golden, because 9 times out of 10 he couldn’t get it up anyway. But now it’s not only possible for geriatrics to produce boners – they sport 12 hour boners. I’m telling you, Viagra really fucked shit up for the gold diggers.

Now, before you commend me for rising above the superficiality of it all, let’s be clear that my refusal to bang bad grandpa for cash doesn’t mean I’m some sort of righteous Mother Teresa type. I’m as shallow as the next person – I just like them to be rich in the face. I’m afraid I’ve always had a thing for the pretty boys, and I suppose I resemble a man in this respect.

Moreover, judging by my past choices, it seems I prefer my men smokin’ hot and dirt poor. And when I say poor, I don’t mean “not rich,” I’m talking broke-ass broke motherfuckers.

Take, for example, my last boyfriend. At 41 years old the man didn’t have a checking account and used to ask me for gas money to tide him over until payday. He was a musician, of course. (Oh, and by the way, this one recently married a rich bitch who bought him a BMW and he now owns half her business. Because life is fair.)

It’s not that I specifically seek out the impoverished when I’m screening potential mates, it just somehow always turns out that way. But you know what? I’m sick of this shit. It’s not that I need a Trumped-up tycoon, I just want someone who has their goddamned shit together. Is that asking too much?

Fuck it. Perhaps I need to pull a George Costanza and do the opposite of what I’d normally do, because clearly shit’s not working out for me as it stands. And in light of the fact that I recently got laid off, securing a benefactor is sounding mighty damn appealing right about now. (Or, ahem, if anyone wants to hire me to write for them, well, that would be almost as good. Smiley face with teeth.)

I will go out and snag some fat cat who can endow me with some of the finer things in life for the fee of my good looks and willing vagina. I will hold my breath, pour Clorox into my eyes and take a Playboy bunny out to lunch so she can educate me in the ways of suppressing one’s gag reflex and staving off the urge to self-mutilate.

I’m doing it, my friends. To hell with nightclubs and online dating. I’m off to the terminal ward to land myself a baron with an advanced degenerative disease and six months to live.

Would you sleep with someone you weren’t attracted to for money? Does appearance matter to you? If you had to choose between looks and money, which would you choose?